MARK ANTHONY 2ND SOLO ALBUM “A HISTORY OF THE FUTURE IN MUSIC” IS OUT ON 17TH SEPTEMBER 2021. 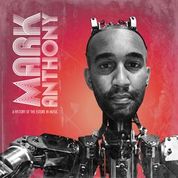 IF YOU WOULD LIKE TO PURCHASE A CD COPY OF THE ALBUM FOR £9.99, PLEASE USE OUR CONTACT FORM TO REQUEST A COPY.

Mark Anthony grew up in Finsbury Park, North London where he began his deep interest in football and music.

At the age of fourteen, Mark’s love for music grew, and Mark & his mates would often be found hanging around the area imitating rappers and writing raps to perform.

Through his love for music, he met a rapper from South London called ‘Hi Breed’ and a singer from West London called ‘Paul Lee’. After many years of hanging out together and sharing a deep passion for music, they eventually formed the music group ‘The Meds Collective’.

The Meds Collective then teamed up with London based producer ‘BA Nusance’ and recorded a catalogue of tracks together.

Their busy gig schedule and media presence, saw the group build up a core fan base around Europe and beyond. The group eventually split in September 2014.

Following this, Mark began writing, recording and performing music as a solo artist. In December 2015, he released his debut single “An 80’s Vibe”, which was followed by the singles “London City” in February 2016, and “I Still Miss You” in May 2016

On 13th August 2016; Mark made a surprise announcement that his debut album entitled “Reckless Caution”, would be released on 31st October 2016.

Mark then went on to release the singles “Ska Train” in April 2017 and “Thank You” in January 2018, which are also taken from the “Reckless Caution” album.

On 12th February 2020; Mark announced that he had formed Lyrical Strangers with multi-instrumentalist & music producer Phil Chamberlin. They announced the immediate release of their debut single “Brand New Day”, as well as announcing that their debut album “Brand New Day” would be released on 30th March 2020.

On 18th September 2020; Mark announced that he had formed Nyther Silence with music producer Panos Barliakos. They announced the immediate release of their debut single “End of an Era”, as well as announcing that their debut album “Urban Tales” would be released on 30th October 2020.

On 25th June 2021; Mark announced that his second solo album “A History of the future in music” would be released on 17th September 2021, with the first single from the album “Monster” being available for immediate release.